This article summarises memories received about the journeys taken by train in the 1940s and 1950s.

Below is a picture showing the route of the local railway line through Thelwall station in 1938.

On 1 January 1923 Thelwall station became part of the London Midland & Scottish Railway (LMS). During the Second World War passenger services were reduced to allow more freight trains and other war traffic to run. After the war the number of passenger services did not return to pre-war levels. The LMS timetable for the summer of 1947 showed only 9 trains in each direction Monday-to-Friday. On Saturdays there were 2 extra up (Altrincham direction) and 1 extra down trains (Warrington direction). No trains called at Thelwall on Sundays.

On 1 January 1948 Thelwall became part of British Railways [London Midland Region] (BR[LMR]). The BR[LMR] summer timetable for 1949 showed a similar level of service to that of the LMS in the year before nationalisation.

The ‘Dingle Special’- Helen and John sent me a copy of the discussion they had with Diana. Diana was born in 1927 and lived in a large house on Knutsford Road in Grappenhall; situated where the Tesco Local is today.

As a young woman during the Second World War years, Diana remembers going from Grappenhall to Lymm by bus with her brother, Donald, and about twelve friends to an evening dance at the Dingle Café in Lymm. The dance was held every Saturday evening and Diana fondly remembers the cucumber sandwiches. After the dance they caught the 11.30pm steam train from Lymm Station to Thelwall. There was no station in Grappenhall. They called the train the ‘Dingle Special’. It was always on time.  The train carriages had corridors, and the toilets were situated at the end of each carriage.  Each carriage was divided into individual compartments with three seats on either side. There were pictures and a mirror on each wall. Passengers had to remember to shut the windows when approaching a tunnel or they would be black with the soot from the engine.

The train was always packed, but it was only one stop to Thelwall.  They then walked home from the station to Grappenhall.  Diana also remembers that her husband proposed to her in the garden at the Dingle Café.

Do you remember the Dingle Café? Did you travel on the ‘Dingle Special’?

The next memory is a summary of a telephone conversation between Lindy and Jenny Jones (THG) on 18th February 2020.

Lindy was born in September 1932. She lived in Thelwall between the years 1953 and 1956, but her mother, father and great-aunt lived in Thelwall for many more years. Lindy travelled to work in Manchester by train from Thelwall station. She remembers walking down Half Acre Lane from her home, the Red House in Cinder Lane, to the station. She worked as a private secretary for the Chairman of the Cotton Spinners Association for approximately a year. At this time she was also courting and her boyfriend lived in Lymm. He also worked in Manchester and travelled by train.  At this time the train carriages were separate with no through route to the next carriage. The carriages had one door on each side.  Lindy would rush to find an empty carriage and then wave from the open window as the train approached Lymm Station, so that he could join her.  She doesn’t remember much about the journey except that eventually other people did sit in the same carriage as the train filled up.

In April 1956, Lindy married John, ‘that young man from Lymm’ and she moved out of Thelwall.  Lindy does not remember using the train for leisure purposes as she was a keen cyclist and also used the buses regularly. Her father, Reginald Sanderson Bleckly worked at Rylands Brothers Ltd, in Warrington for many years and eventually became the Chairman in 1966. He travelled to work by car.

Lindy is the author of the local history book; ‘Iron, Steel, Wire & Work. The Bleckly family; a Latchford Dynasty’. This is a very interesting read with many references to Thelwall.

Here are more memories from Pat and Ian who have always lived in Thelwall. They were born in the late 1930’s and they recalled their memories of the trains and journeys from Thelwall Station.

Pat used to travel with her mum from Thelwall to Arpley Station in Warrington to go shopping. It was a bit of a treat to go on the train as they used the buses more often. For Pat’s mum Thelwall Station was further from their house than the bus stop and the buses were more frequent.

Pat’s uncle was a butcher in the old Warrington market and one of Pat’s aunts worked at a cake shop on Bridge Street. For a treat they would also go to the Ritz café.

Pat remembers that the train carriages had posters inside advertising holidays to different parts of the country such as the Lake District. The carriages were individual; you couldn’t walk through from one to another.

Ian remembers that there were racks with netting above the seats for your bags. The windows had what looked like a leather belt/strap attached to them to aid their opening. The strap had holes in it so that it could be lifted and hooked onto a brass peg.

The photos below are from the website: 1900s Everyday Life, www.1900s.org.uk. Thank you to Pat Cryer for giving permission for me to use the two photographs in this article. Do take a look at the website. 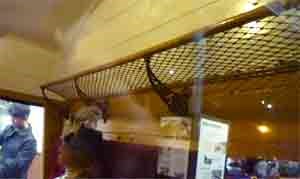 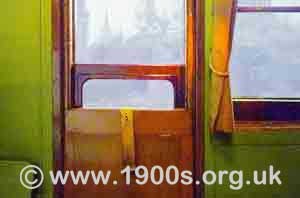 The first photo shows a luggage rack, corded like a hammock, photographed in the York Railway Museum.

The second photo is an open window in a typical 1940s train door. The window was raised and lowered with a leather strap and held in position by locking one of the holes in the strap over a metal stud. The photo was taken in the dining car of the Steam Museum at Swindon. The green walls signified that the whole carriage was the dining car. Normal compartments had a non-descript colour on the walls.

Do you have any memories and/or photos of the trains?

Ian mentioned that his brother, Roger, travelled by train to Manchester Grammar School. Opposite their house and across the road, was the train signal. Roger always struggled to get up in the morning and their mother used to say, ‘Roger, the signal’s dropped’, and then he’d be off down the road like the clappers. Once, Roger was severely reprimanded for lassoing the red lamp post on the gates at the Statham Level Crossing.

He continued to travel by train from Thelwall Station when studying at Manchester University. Then, when Thelwall station closed in 1956, he cycled to Lymm Station. When Lymm station closed to passengers in 1962, he got a motorbike. In later life he became an Anaesthetist.

Below is a photo of the site of Statham Level Crossing on Star Lane and the crossing keeper’s house.  The photo was taken in April 2020 by Jenny Jones. 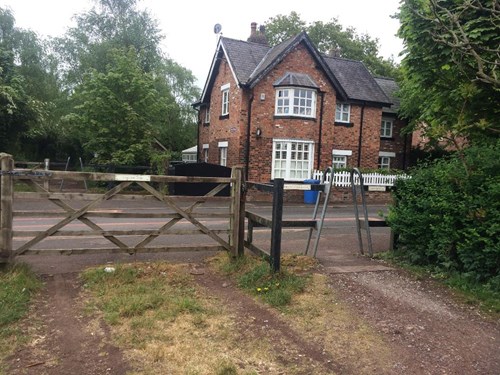 Colin wrote to tell me that he was born in Bruche, and in 1954 after passing the 11 plus examination, he started travelling to Xaverian Catholic College in Manchester with a free pass on the railway between Liverpool Central and Manchester Central, boarding at Warrington Central. In the second or third year of his studies (about 1955) one of his fellow pupils discovered that there was an alternative route to Warrington – possibly starting at Piccadilly and then calling at all the stations between Oxford Road Station and Warrington Bank Quay (including Thelwall). Over a short period they used this service quite often. The locomotive was a steam engine and sometimes there would (excitingly) be carriages with a corridor and a lavatory. However, the time taken in completing the journey plus the inconvenience of walking either from Latchford Station or Bank Quay to his family’s new address in Oxford St Latchford, diminished the attraction of the experience. It could be approaching 6.00pm before he got home to a warmed up meal.

Colin remembers the train calling at every station on the present line to Altrincham e.g. Sale and Timperley. The rail head was on platform 1 in Altrincham and so the steam loco pulling them along had to be uncoupled and replaced by a second engine which backed up to what had been the rear carriages and were now at the front. It took ages! After this lengthy delay the train would set off again via Broadheath and Dunham. Colin has some recollection of the view from the high level bridge over the Manchester Ship Canal and also recalls that the service was well used up to Altrincham, with much thinning out thereafter including Thelwall where only an occasional door banged shut.

He does remember the clank of milk churns at Dunham Station. During the 1950s, adverts for British Railways freight services of fresh food and milk were produced and published. The advert appeared in a magazine published in the UK in February 1952.  The illustration features milk churns and a steam locomotive hauling milk wagons. At this time rail freight was a very important part of the rail network and post-war some food items were still being rationed. Milk trains were common on the railways of Great Britain from the early 1930s to the late 1960s. By 1981 all transport of milk was made by road.

Please do send any information, memories, and photos you have about Thelwall Railway to the THG email address: thelwallhistorygroup@gmail.com. Thank you.