The OS grid reference for Thelwall station is: SJ655871

Thelwall railway station was open for passenger use for only 100 years. It first opened to passengers in 1856 and closed due to dwindling numbers in 1956.

The railway line which ran through Thelwall first opened in 1853. It was known then as the Warrington & Stockport Railway (W&S). The line ran from a temporary Wilderspool station, as there was no bridge over the Mersey at that time, to Broadheath station about a mile from Altrincham. It was known as the line from ‘nowhere to nowhere’. The map below dated 1938 shows the route of the railway, but note that in 1853, there was no Manchester ship canal. The building of the canal was completed in 1893.

When originally built, the entrance to Thelwall station was via a gateway located on Stockport Road. Set back from the road was the modest single-storey brick building, which can still be seen today, although now renovated and re-purposed. The building had a pitched roof, central door and large sash windows either side. Between the station building and the road there were three sidings that formed the station goods yard. Passengers had to cross the sidings to access the station. Behind the station building was the ‘up platform’ (Altrincham direction). The signal box was to the left of the station building. The ‘down platform’ (Warrington direction) initially had only a simple waiting shelter. Passengers accessed the ‘down platform’ by means of a barrow crossing (a means of crossing the tracks to get from one platform to the other).

By the early 1900s the station facilities had been improved with the addition of a single-storey ‘down platform’ building. It was larger and more attractive than the original building. Below is an old photo of Thelwall station (year not known but thought to be the early 1900s). The station master is standing on the up platform. The barrow crossing is clearly visible. On the left side of the photo is the original station building and signal box. On the right side is the newer, larger and more attractive waiting shelter. Beyond the newer waiting shelter is another building, Station House.  Some railway employees were tenants for a time. Unfortunately, this has also now been demolished. 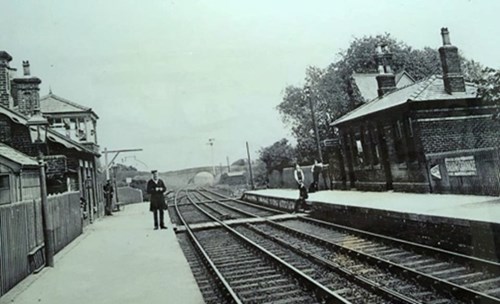 In 1887, Alfred Rimmer (1829–1893), artist and author, wrote an article about Thelwall which was published in the Manchester Guardian newspaper. It was titled, ‘Summer Rambles round Manchester; Thelwall and Lymm. He travelled on the train to Thelwall and wrote, ‘If we take a ticket to Thelwall we shall find ourselves in a country abounding in interest… There are many shapely trees, quite as untouched by the chemical vapours of St Helens or Runcorn as if they were growing in Hampshire, and indeed in no part of England can we find the country lanes of Isaac Walton or Wordsworth more faithfully represented. … And no part of England could show a more thoroughly rural scene or boast a purer air.’

This beauty, clean air and the railway attracted many Warrington industrialists and professionals to Thelwall. During this time there were many fine houses built as the wealthy moved in. Most of those houses still stand today.

The introduction of the motor car in the early 1900s probably contributed to the gradual reduction in train passenger numbers and the station was closed to passengers in 1956. Another Warrington Guardian newspaper article reported on the closure of the station and was titled, ‘the only city without a railway station’.

Passenger trains continued to run through Thelwall until other local stations also began to close to passengers.

Freight trains did use the line for a further 29 years, until in 1985, the line was finally closed. It was lifted in 1988, and in the late 1990s its course through Thelwall was developed as part of the Trans-Pennine Trail. Only one of the original buildings was saved, the ticket office/waiting room. This original building still stands today. 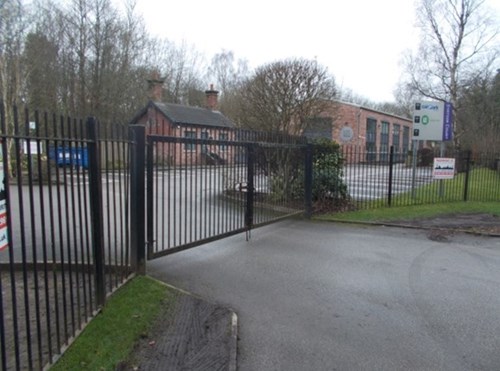 Above and left is the original ticket office/waiting room before renovation. After a brief period of dereliction it was refurbished as part of an office complex that was in use by 2012. The photo below was taken from Stockport road in 2020 and shows the original now refurbished station building.